One of the greatest villains in the Star Wars Empire, Boba Fett, Bounty Hunter and cloned son of Jango Fett, is a true force to be reckoned with. Working for characters like Darth Vader and Jabba the Hut, he is one of the most feared bounty hunters in the galaxy. Known for his Mandalorian armour, deadly weaponry, and silent demeanour, he wreaks havoc in many Lucas Film Star Wars episodes, including A New Hope (1977), The Empire Strikes Back (1980), Return of the Jedi (1983), The Phantom Menace (1999), Attack of the Clones (2002), Revenge of the Sith (2005), The Clone Wars (2008), The Mandalorian (2020) and soon to be in The Book of Boba Fett (2021). 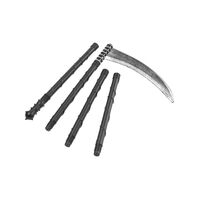